WAR is a context neutral stat. Fangraphs explains context-neutral this way…”A context-neutral stat is one that values a given action equally no matter the circumstances in which the event occurred.” Meaning a single by the leadoff hitter in the top of the first has the same value as a game-winning single.

There are two variations of WAR. One is rWAR which is calculated by Baseball-Reference and the other is fWAR which is calculated by Fangraphs. Position player WAR is similar regardless of which site calculates it. Pitching WAR between the two can vary widely. That’s because FanGraphs uses fielding independent pitching (FIP) and baseball-reference uses runs allowed and innings. Any reference to WAR on this site unless specifically noted uses rWAR.

Before we can figure how many wins a player is worth we first have to calculate how many runs he’s worth. We start by comparing his performance in five different aspects of the game (batting, base running, avoiding double plays, fielding, and position specific runs, to see how much better than average the player is in each aspect. This is measured as runs above average (RAA). An average player is worth zero runs. The formula for calculating RAA is:

Let’s get down to it. To make the explanations and math a little easier to follow we’re going to be looking at Kenny Lofton. Lofton’s career WAR is 68.2. To give you a frame of reference that’s in the ballpark (pun intended) of contemporaries Ivan Rodriguez (68.7), Roberto Alomar (66.7), Craig Biggio (65.2) and Barry Larkin (70.2).

Over his 17 year career, Lofton collected over 2,400 hits including 383 doubles, 113 triples, 130 home runs while having a slash line of .299/.372/.423. The first piece of the WAR puzzle is batting runs. For his career, Lofton’s batting runs was 140. That’s the same as Carlos Lee and sandwiched evenly between Richie Sexton and Josh Hamilton.

Lofton was known for his speed for good reason, he stole 622 bases and was caught stealing 160 times. He could not only fly but he was very good at stealing bases and taking the extra base. Lofton’s career 78 base running runs ranks 9th all-time tied with Joe Morgan and Lou Brock and just behind Paul Molitor (80) and Larkin (80).

His speed allowed him to avoid hitting into double plays. So much so that he was worth 23 double play runs. Putting him on equal ground with Darin Erstad and a tick better than Raul Mondesi and Willie McGee and a tick behind Joe Morgan and Ozzie Smith.

Kenny’s defense was perhaps an underrated part of his game. His fielding was worth 104 runs above average. That puts in shouting distance of Willie Wilson and Brett Gardner and slightly higher than Curt Flood and Hank Aaron.

To account for the fact that some positions are less demanding than others a player gets either a positional credit or debit based on his defensive position played. Lofton played his entire career in center so over his 17 seasons he was credited with 43 positional runs.

When we put all those components together we have a good idea of how much better (measured by runs) Kenny Lofton was than an average player.

The average player with Lofton’s playing time was worth about 318 runs more than a replacement player. When you add those 318 runs to Lofton’s 386 runs above average you get his total runs above replacement (RAR), 704.

WAR is a measurement of wins though not runs. So, to convert RAR to wins RAR is put through a runs-to-wins converter (one win is generally equal to about 10 runs). Once the numbers are put through the converter Lofton’s WAR comes out to 68.2 WAR. That is about the same as Carlton Fisk, Ivan Rodriguez, Eddie Murray, and Ryne Sandberg.

Pitcher WAR
In the same way we used Kenny Lofton’s career stats to help explain position player WAR I’m going to use Mike Mussina to help walk us through pitching WAR. Mussina’s career WAR is 82.9. Again, for the sake of having a reference that’s the same as Fergie Jenkins and about one win better than Bob Gibson and about one win less than Nolan Ryan. 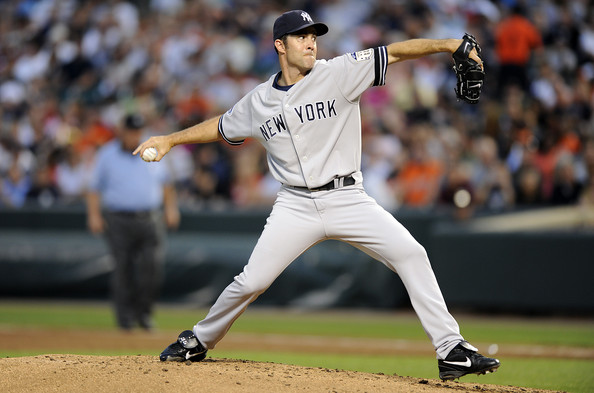 Pitching WAR is about one thing: runs allowed. During his career Mussina allowed 1,559 runs (total runs not earned runs).

Just like we did for position player WAR we first have to find how many runs above replacement (RAR)the pitcher was worth. To do so we need to find the pitcher’s RAA. Doing so is rather simple. You take runs per 9 innings for an average pitcher (RA9avg on baseball-reference) and subtract runs allowed per 9 innings (RA9 on baseball-reference). Then multiply the result by the number of innings pitched and divide by 9. The equation looks like this:

The RAA is then centered so the league average is 0. This recentering adjusts Mussina’s RAA to 463.

Just like the position player WAR, once we have the pitcher’s total RAR it has to be put through a runs-to-wins converter. Mussina’s comes out to 82.9.

View all posts by Dave Franks

This site uses Akismet to reduce spam. Learn how your comment data is processed.